Staking is a rather old replacement for mining against the background of the whole history of cryptocurrency’s existence. It is the right option for getting passive income due to keeping crypto on a wallet. Opposite to mining, staking does not require particular, complicated and expensive computers. Anyway, a little investment is needed.

What is Staking in Crypto?

What does staking crypto mean?

Staking is the mining alternative. It is a cryptocurrency storing and accumulation on special wallets. The blockchain selects a node based on the amount of coins in the wallet. This node must verify transaction and proceed to support the entire blockchain.

How does staking crypto work?

The term “staking” came from the name of the consensus algorithm Proof of Stake. It is the second most popular algorithm, after Proof of Work, on which bitcoin operates. In the process of searching for new options to replace PoW, there appeared PoS, an algorithm based on the number of coins in the wallet. For this reason, the process of keeping assets in an account is called “staking”.

While the PoW algorithm depends on computational power of the computer in choosing a chain validator, the staking algorithm selects a validator by the volume of the wallet. The more funds stored in the wallet, the higher the chance of becoming a validator and being rewarded for adding a new block. So, this is the main difference between mining BTC and staking ETH, for example.

How to stake crypto?

First of all, it is necessary to have a special wallet or account on the staking platforms. In addition to them, large crypto exchange (e.g., Binance and Coinbase) have their own in-house staking platforms, which definitely simplifies things, especially for beginners.

Once an account or wallet is created, you have to fund it in the relevant coin suited for staking. Such coins commonly people are buying on the cryptocurrency market, or exchange yours if you have. On DEX PancakeSwap which is based on BSC, you can find coins such as DEL, ETH, BNB and etc. After you have suitable ones, transfer them to a staking wallet or account.

Besides the mandatory condition of working on PoS, you have to keep in mind the volatility and the minimum amount needed to participate in coin staking. Everyone can find the staking option that suits them based on these parameters, although not all minimums are appropriate for everyone. For example, the limit for Ethereum 2.0 is 32 ETH, which is a pretty big threshold. That doesn’t mean that all blockchains will have that input: Solana has a minimum threshold of $1. Each has its own minimum value for staking.

It may not be a very large amount invested, but you need to have a minimum portfolio. Often, experts advise to make a portfolio for staking out of different coins, and remember that these coins will just be kept in the wallet for a while, which means they have to be free for the investor.

In fact, it is difficult to say exactly how much you can get for staking. It’s all about the decentralized network itself. Each blockchain chooses its own reward based on different parameters.

The calculation of the reward is factored in:

Is staking crypto worth it?

Depending on the blockchain, stakers earn a relevant income. If you take into account the crypto portfolio, which you need to have and a minimum financial understanding, you can figure out approximately what the income from staking one or another coin will be.

It is possible to find out the actual reward rate with the help of special services, but this is not the first thing. A decision should be based on the market volatile, create a portfolio of different currencies and use available funds, which can be left for a long time.

How do you make money with cryptocurrency?

Staking can be specified as a long-term investment. It would be attractive to someone who is engaged in such investments. The staking mechanic is mostly compared to a deposit bank account. Someone deposits funds into account and after a while gets a passive income due to accumulation percents from this deposit. The more assets there are, the higher the accumulation surcharge will be, and so is the case with staking.

Moreover, there is a DPoS (Delegated Proof of Stake). It is like the original PoS, but stakeholders can vote for a validator to work instead of stakeholders, e.t. delegate. So, those validators can operate on their behalf and it depends on the reputation, account value and activity of the validator. The Decimal blockchain operates on DPoS, and users can vote for delegates to verify the transactio their The result is that you need to have a portfolio, build credibility and be active to make money and earn income for any variant of consensus algorithm.

The basic mechanic of staking is clear; within it, there are subspecies:

Staking pools are one sub-species in which multiple users combine their funds and become the one validator. This kind of staking is great for beginners or if the blockchain entry threshold is very high. Typically, staking pools are limited in terms of coin holding time and profits are distributed within the pool itself between participants according to their stake.

Locked staking is when funds are held in a wallet for a predetermined amount of time. The user, himself chooses the time period during which coins will be in the staking, and he cannot withdraw them before the end of this period. In this case, the yield is higher and the user will get more, so fixed staking is chosen by users who do it only for profit.

Flexible staking is the opposite of locked staking, in which no specific time is set for the coins to be held in the wallet. Therefore, it is possible to withdraw them at any time when you need them or want to sell them. Percentage for flexible staking is rewarded until the funds are withdrawn from the wallet.

De-Fi staking is a kind of cryptocurrency credit option. This variant takes place on special platforms and services. This system works on the basis of smart contracts, which guarantee payments and stable performance. Usually, defi staking involves a third party who offers an interest against the cryptocurrency, the service itself acts as such.

Cold staking is operated on a cold crypto wallet. The major condition is to keep assets on the same address. Because the transaction will stop staking on a wallet and all rewards will be lost.

What cryptocurrencies can you stake?

Only coins based on PoS blockchain are suitable. Most popular and demanded are based on that algorithm. So, there’s a wide range of coins to choose from, such as Ether, ATOM, ADA, SOL and others.

Usually, the reward is paid in the native blockchain coin. However, there’s an option to find a staking with two kinds of coins.

There are plenty of coins on the market and it is easy to choose the needed ones. Don’t forget about conditions for rewards when you choose blockchain. Every of them offer different variants.

Here is the best coins to stake:

A lot of different platforms and services for staking are existing now. Among them you can find the usual crypto exchanges, special services, De-Fi platforms and others. Be careful when choosing a platform, and check the information, details about the platform and trust those who already have an established reputation.

This is the list of some of the best place to stake crypto. It is up to you choose one of them or find yours: 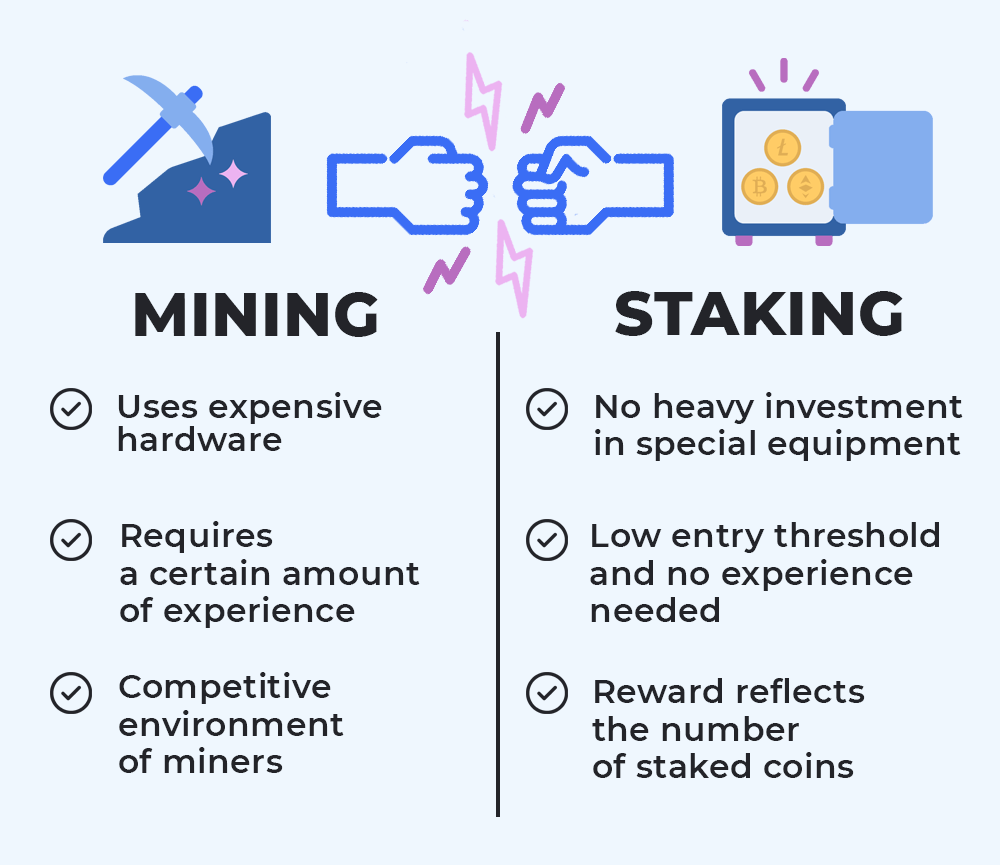 Obviously, just like in any interaction with finance, especially digital finance, there are certain risks, such as a drop in the price of a coin, which will be reflected in the reward as well. Another important disadvantage is the time required for staking. It will take some time for the coins in a stake to bring in income, most of the time you cannot withdraw immediately, but in the case of a locked stake, you can.

There are also cons that can outweigh the risks. Staking has a low entry threshold compared to mining, so almost everyone has the opportunity to become part of the network and keep the blockchain running. Passive income is also a great advantage. Even accounting for volatility, the rate can go up, then the rewards will be higher. Long-term investing can be a good way to earn income if you put together the right portfolio. For taking the right variant, you can choose from our top coins and look for some which are related to them.

Staking is a great substitute for mining because it does not require a heavy investment in special equipment. It’s convenient for most people because it doesn’t require a certain amount of experience to generate income and to understand the technical details. Perhaps, staking has a future, although more and more new options for making money in cryptocurrency are coming to replace staking.