Bitcoin creator Satoshi Nakamoto decided to limit the total amount of BTC that can exist to 21 million, which means that there will only be that amount of Bitcoins and no more.

They are created during the Bitcoin mining process and serve as a reward to miners for their work on detecting the next block. This is where the fun begins, because according to the data by Coinmarketrate.com, every 4 years, the block reward amount is reduced by half, which is known as the ha lving event.

Currently, more than 19.114 million BTC have already been mined, so there are just under two million left to be mined.

But if we leave aside the numbers for a while, the important thing is that this limits the amount in circulation, creating a deficit and curbing inflation, which is often observed in currencies where the supply seems endless.

When Bitcoin approaches the limit, the economy of this cryptocurrency will change. The incentives for various participants in this ecosystem, such as miners and traders, will change.

For example, the former will no longer rely on block rewards. Instead, they will start to profit from transactions paid by users.

The network will also suffer, since we will no longer see small merchants in it, but probably individuals or companies with large amounts to move and pay commissions.

Of course, this is all speculation, as cryptocurrencies are still in their infancy to try to predict the effects we will see on Bitcoin when it reaches the limit of the number of coins that can exist.

Consequences of reaching the limit of 21 million BTC

Before we begin to consider the consequences of Bitcoin reaching 21 million existing cryptocurrencies, it is necessary to analyze whether it will ever be able to reach this figure.

If you take the source code of the BTC and analyze it, you can see that it will never reach the exact figure, and will lag behind by several Satoshi.

If you do not know what Bitcoin mining is, then you should understand that miners must solve cryptographic mathematical problems in order to verify and confirm blocks with transactions.

The reward for this work is a certain number of Bitcoins that are created in the same block by the miner himself. 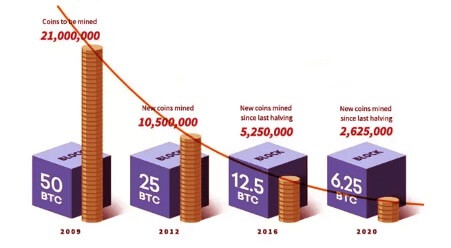 But this reward is reduced by exactly half every 4 years in the so-called “halving” – about the same time it takes to mine 210,000 blocks.

This trend will continue approximately every 4 years until the last Bitcoin that can exist is mined, which is estimated to happen in February 2140. 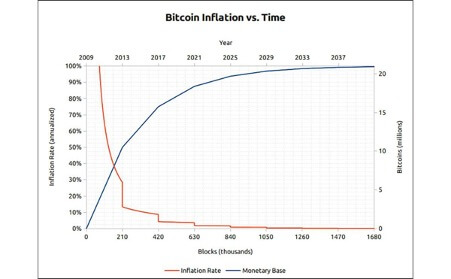 According to Andreas M. Antonopoulos, author of several books about Bitcoin and a major figure on the cryptocurrency scene, the number 21 million is an asymptotic value:

“This is a value that should be approached, but which can never be achieved. This is due to the fact that the block reward and the amount of Bitcoins in stock are never expressed in exact terms. The Bitcoin code uses functions to round decimal points to the nearest integer”.

In practice, this means the loss of several satoshi – the minimum unit of account of BTC, during the confirmation of the block.

And so, what happens after the extraction of the last BTC?

The consequence of reaching the predicted limit is that new BTC will not be issued while miners continue to work on confirming blocks with transactions and use commissions as the main source of income.

However, it is difficult to predict what effect the achievement of the full sentence (or almost achievement) proposed by Satoshi Nakamoto will have. This is due to the fact that the Bitcoin ecosystem continues to develop today.

Initially, Bitcoin was conceived as a medium of exchange, but over time it became more popular as a store of value and investment.

Perhaps the cryptocurrency ecosystem will undergo a transformation similar to the one we observed with its original purpose. A lot can happen till 2140.

For example, there may be a change in the cryptocurrency protocol, which allows you to have more than 21 million coins, although it is unlikely. We talked about this in our last article.

After all, the source code is open, and anyone can create another version, either a hard fork or a soft fork, accepted by the majority.

Some examples of cryptocurrencies that were born from Bitcoin are Bitcoin Cash, Litecoin and Dogecoin. All of them have undergone minor changes and created new coins, the value of which exceeds billions.

Whatever it was, the impact of such an event as the extraction of the last BTC will have a huge impact on many things.

Block rewards and transaction fees are sources of income for miners, with the former accounting for the largest part.

High cryptocurrency prices allow miners to cover operating costs and make significant profits, since they can sell the earned BTC on the market.

As Bitcoin approaches the limit, the reward will not be enough to recoup the cost of mining equipment, let alone making a profit. This will increase when we finally reach the point where there will be no more rewards.

In both cases, a sufficient increase in fees is expected to cover this gap.

The size and mechanics of these fees depend on the state of the Bitcoin network at that time, on whether the cryptocurrency is used as a medium of exchange or a store of value.

In the first case, we would find a large trading volume, which would lead to reasonable commissions for miners. In the second case, the fee is likely to increase so much that it will reach a level commensurate with the needs of miners.

Another possibility is that bitcoin miners form a kind of cartel among themselves. Controlling transactions and forcing them to pay large commissions that allow them to make minimal profit.

We can also find selfish miners who complement each other to hide new blocks and release orphan blocks that are not confirmed by the network. This will delay the production of the last block and provide greater rewards for new blocks when they are finally released.

The formation of cartels in the mining industry is not so far-fetched and not far from reality, because already today we see how in the raw materials sector there are such entities that control the prices of oil, for example, or other goods.

The most valuable and important thing about Bitcoin is its network. Blockchain technology is a solution to the problem of accounting systems that are so characteristic of financial transactions today.

If Bitcoin becomes a popular medium of exchange in the future, the number of transactions will increase dramatically. The network will slow down because the priority is given to integrity and accuracy, not speed.

In such a scenario, second-level technologies, such as Lightning Network, are necessary in order to be able to confirm most of the transactions that occur. Therefore, only the main chain is used for large transactions.

The second possibility is that the number of transactions will drop, which will happen if Bitcoin becomes a value-storing asset.

Here, small traders and investors will no longer be part of the ecosystem, they will be replaced by large institutions and players with great purchasing power.

Fewer transactions will be made in them, but they will cost more because they are used to pay miners’ commissions.

Satoshi Nakamoto has developed a cryptocurrency so that it functions as an everyday means of exchanging values. But as the number of transactions increased and due to slow data processing, this was lost over time.

Meanwhile, shortages and rising prices have turned it into a magnet for investors and speculators.

Their bets have made price volatility obvious, pushing other types of investors away from the traditional sector.

By the time the last Bitcoin is mined (or as it approaches this point), the BTC may have acquired a more definite identity than it does now.

Perhaps sidechains such as the Lightning Network could become very popular, providing fast and cheap transactions that would restore Bitcoin as a medium of exchange.

Shortage in the amount of Bitcoin will also cause its price to rise, and with it the market valuation.

Perhaps, with greater regulatory stability and clearer rules of the game, this may attract the attention of other types of investors (so-called institutional investors). They can provide more liquidity and limit volatility.

We have already seen how the approval of an ETF has triggered significant upward movements for Bitcoin.

The 21 million Bitcoin limit is designed to control the inflation that would otherwise occur in the case of an infinite supply. When this limit is reached, miners will have to change their business model and rely on fees as their main source of income.

If technologies working in parallel with the main chain are developed, we will see fewer movements in the blockchain, but these will be the movement of large amounts of money between directions.

There may also be a change in Bitcoin’s identity when it becomes clear whether it is a solution that offers value storage, a medium of exchange, or both.

But, none of these forecasts is immutable. Perhaps in 20 years the situation